What Action Will You Take Today?

“Do you want to know how to fix climate change?” said the nice man on the street. I replied, “The only way is to cut back drastically on the number of people and machines. He paused a few seconds then asked if I wanted to know another way. Well I would have loved to talk to him but my companions kept walking and I had to catch up. By myself, I would have been crazy confrontational.

The technological development after the Industrial Revolution extended human life expectancy and created an exponential increase in the world population. These extra humans and the vast number of the machines they create and love, put a strain on this planet.

No amount of recycling, green energy or cuts in consumption will alleviate that strain without reductions in what is the basic cause of the problem.

I always recycle but do not believe it has a net benefit. Recycling centers will not save us.

Green energy is not net zero. The green stuff must be constructed and disposed of when at the end of its life. That takes energy and pollutes.

How much stuff will rich people be willing to sacrifice? Do we tell the poor people, too bad, the cutoff for greater consumerism just ended, no chance of you getting a better deal.

Perhaps energy rationing can do the trick. That may also lead to the deaths of people without adequate heat or air conditioning or other life-saving machinery. Machines need to be culled and the extinction of some people due to this reduction could be friendly fire.

Covid19 just might save the planet from climate change. Of the nearly 8 billion people on this planet, Covid19 killed approximately four and a half million. The World Population Clock keeps ticking with about 200,000 more births than deaths per day. At this point, the microscopic virus can’t do the big job.

Aim for Negative Population Growth. This method must be compulsory since, right now . . . more babies than funerals. Picking and choosing who will breed is a dicey situation.

Besides the point of no return in climate change may come quicker than NPG can succeed. Are we willing to exterminate people in order to save Mother Earth?

How to choose who lives and dies? Which ethnic, racial, political or religious group do we choose to go first? The old have had a good run of it, they might be chosen first. Or maybe the young since the world holds no future for them anyway. The climate change activists may decide to stop having children on their own. They may even be willing to die first for the greater good.

Maybe the Star Trek episode “A Taste of Armageddon” can be our model. By random computer-generated selection, people can enter execution booths when their number comes up.

Alongside the natural-resource devouring humans, the fuel-consuming machines must be culled as well. At this point, our relationship with machines is so symbiotic that our health and joy in this world will be shattered. Separate my iPhone from my cold, dead hands.

Computer keyboard-tapping and mouse-clicking activity must plummet. Check out the energy consumption from these activities. Who cares if thousands of blogs or internet stories die? (Although I will miss the personal and political insights from those in the entertainment industry.)

If climate change is an existential threat to humanity, what else can we do? I should have stayed and listened to that nice man so he could tell me the other ways to stop disaster. Are my nihilistic solutions excessive? What are the alternatives?

The Poetry of Coronavirus

John Donne desired immortality. He died nearly 500 years ago and people have not changed much.

My life expectancy ranges from the next three minutes to the next 30 years. I greedily hope for more.

“And death shall be no more; Death, thou shalt die,” Donne wrote in a poem. This idea rested in a Christian plan of resurrection and everlasting life. Today we feel free of these mythologies. But are we free?

Coronavirus with its real threat to our expected healthier, ever-increasing lifespans blindsided us. Of course pandemics existed in history and will continue to exist. But our sophisticated medicines, scientific advancements should have found a solution before the problem even began. So began a shockwave around the world.

John Donne’s words are archaic, his poetry steeped in Christian ethos, his conceits include the seduction of women. And we can relate to his deepest desires. We criticize the old, yet scrounge around for an afterlife among the hardware and software of our new gods. Death is still alive and well.

Dreams of a Voyeur

I confess, I am a voyeur. I spy on birds by luring them in with feeders, birdbaths and flowers. The squirrels come even though I don’t try to lure them in.

A utility area near the house was filled in with stones recently. The squirrels began to check out the terracotta-color stones immediately.

Through my kitchen window, I saw a squirrel pick up a stone, examine it intensely, take a nibble on it, then throw it down. What a silly squirrel, he thinks that rock is a nut. Then he picked up another one and ran off with it.

I guess he took it somewhere safe to hide until it was ripe enough to crack. Maybe a windowsill or the garage. Or in the flower beds and shrubs where I find many of those rocks half buried.

One night I had a vivid dream of this squirrel activity. In my dream I picked up a stone and nibbled at it. Then I said to myself, “The squirrels are right, these stones taste good.” Most dreams I forget, but this one keeps running through my head. This must be a case of squirrelmorphism. 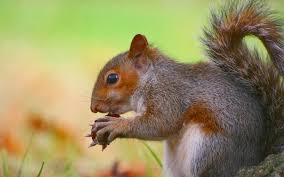